second anniversary: am I a bostonian yet? 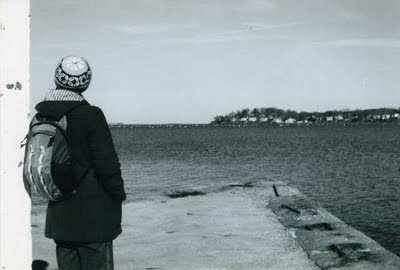 I realized a couple of weeks ago that Labor Day weekend would mark the second-year anniversary of my arrival in Boston to begin graduate school. The moment (so often the case in these situations) feels both much more recent than two years ago and also as if it happened in some far distant past-life. Not that the experience has been radically different from what I expected in any way, but it has felt like a more decisive, and more permanent, break from previous my previous existence than other relocations have been. So now that I've reached the 24-month mark, I think it's appropriate to pause and reflect on whether or not I've made peace with my new place in the world.

I use the phrase "made peace with" deliberately, as I have never felt quite at home, full stop, in any one geographic place I've lived. I often react intensely to the landscape of a geographic place: the semester I lived in southern Oregon, for example, I fell in love with the contours of the Cascade mountains, but missed the vast openness of the great lakes acutely; during my year abroad at the University of Aberdeen, I chafed at the (to me) claustrophobia of big-city life, while I fell in love with the North Sea, just a stone's throw from my room. When I am away from West Michigan, I feel the temporal displacement in my bones even though when I am there for long periods of time I grow restless and increasingly ready to depart again on the next adventure.

I knew when I left Michigan for Massachusetts in 2007 that I would miss my family grievously. Yet returning home is no longer possible in the way it once was, as the people of my generation scatter across the country and (myself among them) set up new homes, in new spaces. In short, it is no longer so easy to identify one single place as "home.

After two years here in Boston, I still find it difficult to think of myself as a Bostonian-with-a-capital-B, yet I do feel I have made peace with the city and with my graduate program (perhaps to a lesser extent than Boston itself -- but then again, that's how I always feel about educational programs). I am embarking upon my self-directed thesis work about which I feel passionate and am content with my work daylighting as a library assistant. My neighborhood feels like my neighborhood, and I have tentatively started to imagine what it would be like to live here for more than my student years. I have the sense that, when or if we leave, I will only then realize how fond I have become of its particular shops, parks, sidewalks, trees, sights, sounds, and smells.

Above all, I am fiercely protective of this life Hanna and I have forged together; a life that I hope with my entire being we will take with us regardless of where in time or space we eventually wash ashore. Meanwhile, Boston has been a damn good place to live, all things considered. School and work -- along with the used bookstores and awesome coffee shops -- keep me here for the time being. But life with Hanna is what makes it home.