". . .but the people working there are fairly nice." 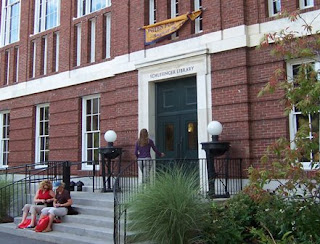 Today, I took a field trip to Cambridge to visit the Schlesinger Library at the Radcliffe Institute, one of the largest repositories of archival material on women's history in the United States. The impetus for the visit was an assignment for my Archives class, in which I had to visit an archive and describe the experience. However, I admit that enjoyed the very personal pleasure--perhaps more aptly described as "reverential awe"-- of simply by being in the same space where so much of the history (or herstory as many feminists would insist!) I care about is preserved, and the historical work I value done.

(Note: In the photograph above, the banner above the library's main entrance reads "Votes for Women!" in the suffragist colors of violet and gold).

Aside from the pilgrimage aspect of the visit, I actually chose the Schlesinger because they are the repository for the Boston Women's Health Book Collective records. (The BWHBC is the collective that wrote--and continue to update--the classic book Our Bodies, Ourselves, and are feminist advocates on a variety of women's health issues worldwide). Our Bodies, Ourselves was one of my earliest, most comprehensive, and unabashedly feminist forms of sexual education and it remains near and dear to my heart (as well as close at hand on my reference shelf). I was interested in seeing some of their earliest manuscripts and gleaning what I could about the collective consciousness-raising process that had led them to publish the first edition of Our Bodies, Ourselves--then called Women and Their Bodies: A Course--which sold for 75 cents in 1970, and was intended as a working study guide for women's health workshops. 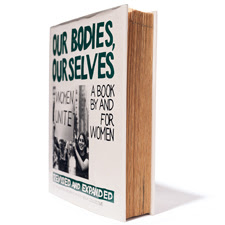 The original publication was fun to browse through, permeated as it was with the language and political ethos of the women's liberation movement which had given it birth. The first chapter of the 1970 edition, for example, is titled "Women, Medicine, and Capitalism"; a later chapter on abortion describes the hurdles unmarried women face when seeking birth control. A footnote highlights a single clinic in Boston where women--regardless of marital status--can obtain birth control no questions asked. The authors of the chapter observe: "this program is financed by the federal government, but the people working there are fairly nice."

The most fascinating folder of material I read through was a collection of newspaper clippings and letters detailing the backlash to Our Bodies, Ourselves in the late 70s and early 80s when, apparently, it was being used quite widely in high schools as part of the health curriculum! In this age of abstinence-only education, it's amazing to me that OBOS ever made it into high school libraries, let alone the curriculum. One teacher from Pennsylvania wrote the collective and described in detail how her students (ages 14-18) had used the book as part of a human sexuality class, including their sophisticated interactions with a pro-life activist who insisted on coming to the class and speaking on abortion. Another letter, written to a high school librarian in 1978, was from a pediatric doctor with teenage daughters who lauded the librarian for her defense of the book and observed:

Young people are far better served by the combination of access to all valid knowledge, even if at variance with parental thought, and the opportunity to discuss this openly with concerned and mature adults.

On the other side of the controversy, of course, were outraged parents and organizations such as the Moral Majority, which sent leaflets to its members detailing (in their minds) unacceptable sexual and political content of the book. One man was quoted in a 1981 newspaper clipping: "I am challenging [defenders] of this book to walk into church and read material out of Women, Our Bodies, Ourselves [sic]"--clearly expecting his audience to be shocked by the idea (though I rather like the image myself).

While this particular trip to the archives was a self-contained event for the purpose of a class assignment, I chose the content with an eye to my interest in feminist activism around sex and sexuality education, and who knows--these records may continue to play a role in my graduate education as I begin the task of designing the project for my history thesis.